I've been a late comer to Great British Bake Off but now I'm hooked. I have to admit that I'm in awe at how talented (most of) the participants are, but it's also clear that keeping it simple and getting the basics right is often the surest route to success.

One thing that I hadn't expected was to be inspired by the use of unusual ingredients, but after watching a recent episode I decided it was time to reboot my banana bread. 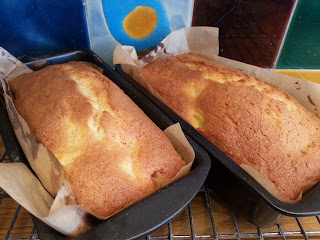 Posted by Just trying it out at 8:30 PM No comments:

I love Chinese food, I love spare ribs and I love (almost) anything deep fried. When I started making this, I was slightly scared by the long list of ingredients. Then, to my surprise, I found that I had all of them in my cupboard or fridge - yes, even the fermented red bean curd! The original recipe comes from The Woks of Life, which I think might just be my favourite new food blog.

I'd become a bit bored of cooking over the last couple of years and it took me a while to figure out why. The answer was surprisingly simple: I was no longer making the dishes I wanted to make but was instead trying to second-guess the somewhat more conservative tastes of my children. Chicken is a case in point. Whenever there was a whole chicken in my fridge, I felt under pressure to do roast chicken, but what I really wanted to make was a chicken curry with handfuls of fresh coriander, some Szechuan fried chicken, or this Spanish chicken cooked with garlic. Oddly enough, my more selfish approach to cooking doesn't seem to have an impact on my kids, who enthusiastically ate the risotto that I hadn't made since 2014 for fear of offending their delicate palates! 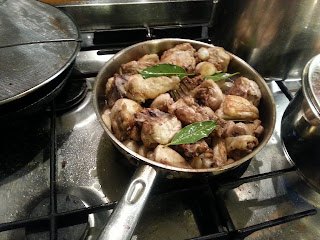 I thought I already had a recipe for this on my blog but was surprised to find that I didn't. Then I turned to Moro (by Sam and Sam Clark) and there was my recipe - in the form of a heavily annotated version of the original (including annotations, additions and deletions). The Moro recipe is actually very good but I feel it is a little too restauranty (a few details that don't add much but help make a simple recipe seem daunting). And my version is definitely closer to the pollo al ajillo that I used to eat in a bar off Plaza San Antonio in Madrid back in the late 1980s with my friend Richard.

Posted by Just trying it out at 7:36 PM No comments:

This is a really simple dish. There is only one trick to it, which is to start with cold oil so that the prawns stew slowly, rather than frying quickly. 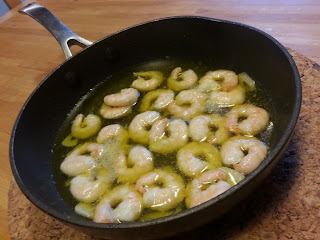 Method
Put plenty of olive oil in a medium sized saucepan. Add the prawns and the garlic and cook over a medium heat until the prawns are cooked. (Don't overcook them; they should be juicy, not tough.)
Sprinkle with a little salt and some parsley and serve.

Posted by Just trying it out at 5:27 PM No comments:

This recipe is adapted from a rather charming comic-strip version by Len Deighton (the spy author). I've tweaked it a bit as the proportions in the original were slightly wrong, causing the fritters to fall apart on contact with the hot oil! The salt cod comes from our local Portuguese cafe, Casa Amiga, where I often go with Sammy to read the papers, drink coffee and eat custard tarts. 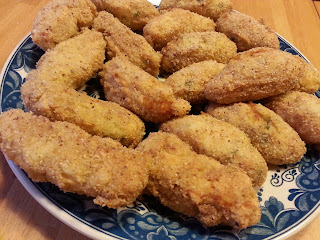 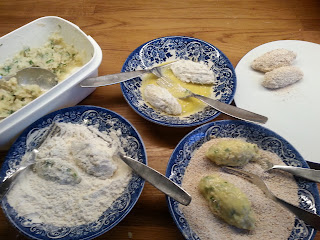 Posted by Just trying it out at 5:10 PM No comments:

Every cook has a repertoire of dishes and techniques that grows and changes over time. I can't always put my finger on when I started cooking a particular dish, but I know that this is one that I first cooked when we spent a few months in Bagni di Lucca in the autumn of 2009. It was a regular for a while, and then my kids became less than enthusiastic about it so I stopped making it. I was reminded of it the other day when I spotted a packet of arborio rice in the cupboard, so I decided to give it another go. The original recipe is from Maxine Clark's Flavours of Tuscany, although I have tweaked it a little bit. 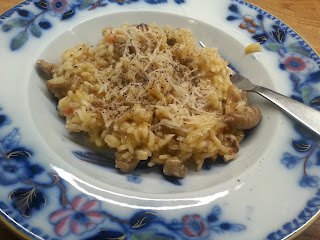 The internet is a great resource for cooks (well, I would say that) - particularly if you are looking for a specific recipe or need to find out how to cook an exotic or unfamiliar ingredient. When I wanted to track down a recipe for the spicy fried chicken at my favourite Chinese restaurant, I quickly found a dozen different recipes, compared them, and picked the one I liked best.

But books have their place too. In search of inspiration for what to do with a bag of peppers that were reaching their sell-by date at the bottom of my fridge, I reached for my dog-eared copy of Claudia Roden's Mediterranean Cookery, published to accompany a BBC TV series in 1987. The first item in the index for peppers was pepper relish - a Tunisian dish called slata méchouia nablia. So that was what I made. 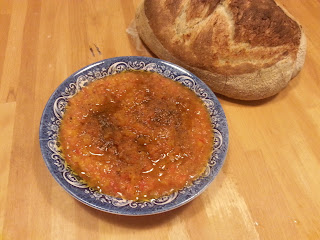 
The revolution will be televised

British food has changed almost beyond recognition in the last 50 years and continues to do so. Because the change is ongoing, it is tempting to assume that it is also recent - so people talk about the 1980s as if they represent the bad old days of British cooking. Having learnt to cook during that decade, I remember it as an exciting time when lots of new ingredients, cuisines and cooking styles were being introduced to the UK (a bit like today). And a lot of the credit must go to the BBC, which produced shows presented by the likes of Delia Smith, Keith Floyd, Madhur Jaffrey and Claudia Roden, and the books that accompanied them.

Posted by Just trying it out at 9:32 PM No comments:

Just trying it out